Teresa Piccola’s harrowing experience of possession and liberation through the solemn rite of exorcism is a cautionary tale that ends with great hope.

Writing for the National Catholic Register, Bree Dail goes on to report:

Terese Piccola suffered under so many secrets.
“On the outside, I was the perfect mother, the perfect wife,” she said. “Inside, however, I was broken — and what is worse, I thought I deserved it.”

Speaking exclusively with the Register over the last three months, Piccola related details of her life growing up in an Italian-American home in the suburbs of New York, her marriage and motherhood raising four children, and her activism in the pro-life movement and in her parish — all while quietly enduring years of psychological and emotional torture and unexplained physical ailments.

Her world was turned upside down when extraordinary diabolical phenomena began to manifest themselves as attacks not directly on her, but initially on her children. Her plight ended only after an excruciating year and a half-long battle under the guidance of a clinical psychologist — an expert in possession cases — and through the solemn rite of exorcism.

According to Dail, Ms. Piccola relates how she was sexually abused at a young age, then repeatedly raped when she was thirteen.  Apparently–like too many victims report--Piccola never told her parents or reported the abuse out of the fear that she would be the one to get into trouble.

“I participated in séances and hypnotisms with friends, but I believe the most defining activity happened with the Ouija board when I was 18 years old,” she said. “My sisters and I used it late one night in the house, and something seemed to interfere with the movement of the dial. After that event many strange occurrences happened in the house — water turning on and off, footsteps on the stairs and furniture moved while no one was home.”

And like many victims of abuse Piccola eventually learned to dabble in the Occult  as a means to escape reality.  For many people, Ouija seems to be just an unusual curiosity, a harmless activity at parties or teenage sleepovers.  However many victims report paranormal; events occurring afterward and lasting for days, months or even years, some attribute the use of the device as the gateway for entities to enter their lives, oppressing or even spiritually possessing them.

“I had an abortion when I was 17 years old,” she told the Register. “I was a senior in high school and never told my parents. After carrying so much shame with me from childhood, I couldn’t bear to tell them that I was sexually active and pregnant. After my abortion, I became bulimic, sexually promiscuous, depressed, more obsessed with the occult.”

Years later, after marrying and giving birth to her four children, Piccola said she still often felt entirely alone and isolated. Seeking to “atone” for her abortion, she volunteered in pro-life activism and at her church.

These testimonies are heartbreaking; far too many times we read or hear firsthand a woman relate how an abortion changed her.  How can anyone bring relief to a woman who is overwhelmed with guilt, knowing that she made a conscious decision to end the young life in her womb.  Worse yet, after aiding the abortionist’s grim profession, how many young women suffer in solitude, unable to share their grief with those closest to them?

Things began to turn for the worse, however, when her youngest son began having violent, unexplainable nightmares. Piccola and her husband asked their parish priest to bless their home. The dreams subsided for a time, but would again revisit her son — so much so, their priest advised them to connect with the diocesan exorcist. It was through this exorcist, during a healing Mass, that Piccola discovered she was the conduit of the demonic oppressions of her family.

Having been involved in these situations, I can state from personal experience that far too often the victim suffering at the  hand of the unseen entity, is not in fact the one who needs mental health care or even an Exorcist.  Many people who are under attack initially feel no symptoms but the demon instead chooses to attack those they care for deeply.  This is the most insidious tactic found in the adversary’s arsenal.

Piccola said, “but Hollywood loves to depict a possessed person in a very dramatic way. I think this is not good as the enemy loves to be in the spotlight and glamorized. We give way too much attention to him. I can assure you that my eyes never bled, my head never spun around and I didn’t look like I was in a state of psychosis.”

“Quite frankly, outside of the extreme exhaustion — which made my face look drawn — no one would have known I was under such terrible bondage,”

Again this is fairly typical, the victim very seldom displays outward signs.  I do not know of any Exorcist who has reported seeing a victim who has undergone such an outward transformation as depicted in the 1973 movie, The Exorcist when child actress (at the time),  Linda Blair had to set for hours each day to receive the makeup and prosthetics in preparation to portray the fictional character Regan McNeil. 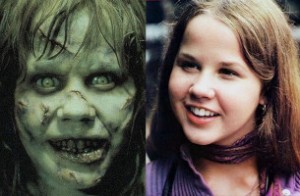 Linda Blair, with and without makeup in The Exorcist

Piccola would undergo the solemn rite of exorcism once per week for more than 18 months, in sessions lasting up to three hours. On those days, she and the deliverance team (which included the clinical psychologist and a group of laymen who were there to pray and support — at times, physically — the exorcist in his work) would always begin by going to Mass.  After additional prayers of protection for the group, the exorcist would lead them in the Litany of the Saints. It was here, Terese said, that the demons that possessed her would begin to manifest themselves.

In Dail’s article, Piccola goes on to explain how she felt during the sessions; Piccola described, again, how helpless she felt at times, when her body was no longer under her control. “The demons would seize my body and voice to manifest,”

However in my opinion the most profound statement made by Piccola is this:

“Ultimately,” she said, “I had to accept that this was not my fight. I had to cooperate with Jesus, letting him take control. It was very hard. It is a daily, sometimes hourly commitment to not give up, to surrender, to trust.” “The real challenge of possession was to reject all the things that had separated me from God,” Piccola said. “Liberation happens when and if there is a willingness to change. The person must want to be liberated. The movies lack this very important piece. It’s not some magic trick where a priest enters dramatically and scares the demons away. It takes full rejection of evil and desire for good. God wants us fully restored.”

It had been theorized that allowing ourselves to be knowingly separated from God opens the door to all sorts of trouble, including demonic oppression.

“… Humility is the key,” Piccola said. “When we are broken — such as I was wounded and broken — we must learn how to forgive and not just others, but ourselves.”

For far too many of us–learning to forgive ourselves–is the most difficult task, not being able to do this seemingly simple task, keeps us separated from the divine light of God.